This article describes the approach taken and some of the issues encountered when adapting the existing GFF‑AMH‑7 Amharic keyboard for easier use on phone and tablet touch screen devices.

A widely used Keyman Desktop phonetic keyboard for Amharic (developed by Geez Frontier Foundation) was also compiled and made available for use with KeymanWeb. When used with web browsers on desktop computers, the behaviour of the keyboard was identical to use with Keyman Desktop, but use of the same Amharic keyboard on smart phones or other touch screen devices revealed a number of weaknesses in the layout.

The desktop layout has a default layer and a shift layer which are fairly similar: 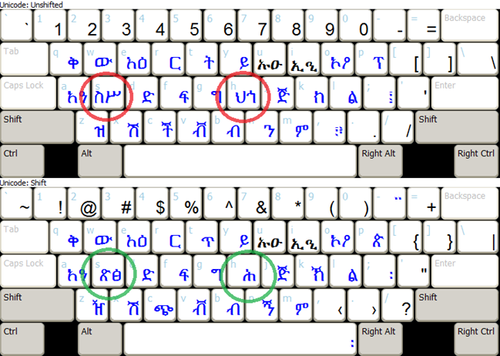 Several keycaps have more than one Geez script letter, indicating that pressing the key twice changes the character output. Geez script is better understood as an Abugida, rather than an alphabet, since each consonant-vowel syllable is a modification of the original letter rather than having separate letters for consonant and vowel. So when entering Amharic, the form of a consonant changes from the default syllable form to the appropriate syllable character for the consonant and vowel pressed. However, as each vowel can also occur in stand-alone syllables as either pharyngeal or glottal forms, the two separate syllables for each vowel are shown on the "a", "e", "i", "o" and "u" keys.

But what about the extra characters on the "s" and "h" keys? Amharic (like most Semitic languages) is rich in fricative sounds, and Geez has four separate, distinct phonemes that are roughly similar to the English "s", and three similar to "h". The desktop layout handles this by using repeated keystrokes in combination with shift to select the alternate consonants (before typing the appropriate vowel). That works for a desktop keyboard, but not for a touch screen device, for which it is often impractical to hold a shift key while touching another key.

Small format touch-screen devices such as phones have a further difficulty in that if they display the full number of key rows and keys in each row that appear in the desktop layout, the keys are too small for convenient use.

On the other hand, touch screen devices offer one very significant advantage over layouts based on a physical keyboard - it is quite easy to configure dynamic touch screen layouts to display contextually appropriate character alternates in separate key windows as each key is touched.

With the above background, the following design goals were set for developing a touch screen layout for Amharic:

Achieving the design goals required making a number of decisions for each format (tablet and phone), in particular:

Keyman Developer 10's Touch Layout editor greatly simplifies the process of developing the JSON layout file that specifies the touch layout for each device, making it easy to move keys around, create pop-up key arrays, and adjust key widths, labels and other parameters. While the graphical interface does not allow moving entire key rows between layers or device types, that is easily managed using the code window.

To keep a keyboard compatible with the desktop version, it is important to use the same key identifiers and "shift states". So, no matter whether a particular character occurs in a visible row or in a pop-up array, it should usually use the same code as on the original desktop layout keyboard.

Where a key did not occur in the original layout and does not correspond to a desktop layout key, identifiers will usually be something like T_<name> where <name> will typically be a Unicode character name, or an obvious contraction of it. Note that this is just a rule of thumb and key identifiers can be anything that makes sense. Such keys are distinct from the K_<name> identifiers that are associated with physical keys, and should normally have a mapping rule added explicitly to the mapping program. If no rule is added, output will default to the keycap text, but this is not recommended.

All key "rotations" - pressing the same key repeatedly to select from alternate output characters - in the original desktop keyboard program are still supported, but have been supplemented by pop-up key arrays, allowing a user to visually select the wanted character instead of stepping through alternates. Similarly, Ethiopian numerals can be selected from a pop-up key array attached to each numeral key, as well as being output by pressing the single quote key before a digit key.

The final tablet default keyboard layer, as displayed in the Touch Layout editor in the current release of Keyman Developer 10, now appears as: 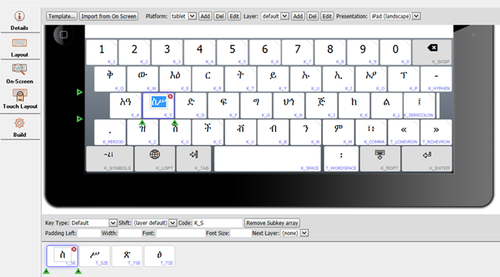 Here the editor is shown with the "s" key selected, displaying the pop-up key array with the four different Geez characters that can be produced, each of which will combine as necessary with any subsequently typed vowel.

For the small format (e.g. iPhone) layout, the two keyboard layers are:

For these layouts, the row length has been reduced to the minimum number of ten keys, moving backspace to another row. The numerals only appear on the second layer, as is usual with phone layouts. All less-frequently used keys are now available only in pop-up key windows.

With these principles guiding all the changes made, the Amharic keyboard now adapts to various device form factors, making use of device-specific usability factors, while retaining the same conceptual input model as the original keyboard. This means that users can use the keyboard layout on different devices with a minimum of difficulty. These methods should be applicable to other keyboard layouts.

Other articles on developing touch layouts:

You can distribute your keyboard to other users by following the instructions in this article: